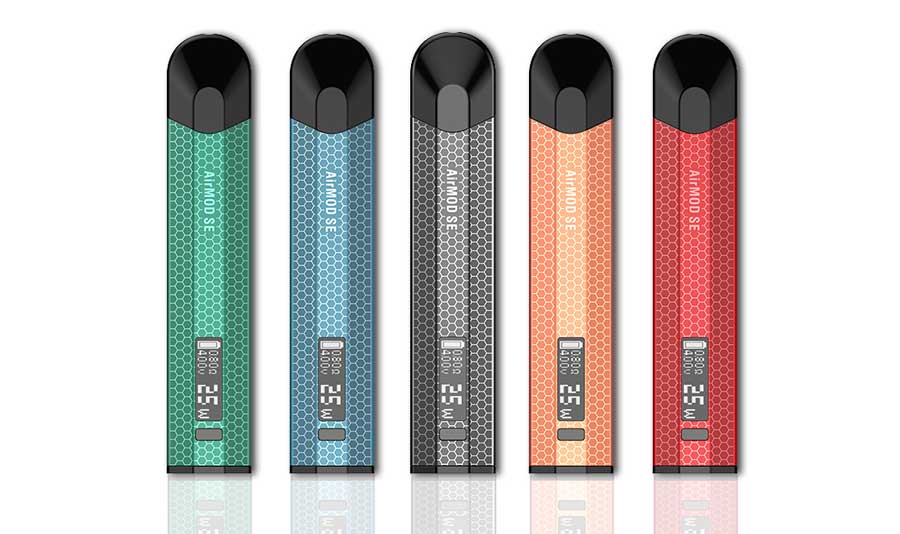 Here are cheap deals to buy the OneVape Airmod SE pod system kit, for sale at a low price.  This pod system features a 700mAh battery for up to 25 watts of power, an OLED screen, a new UI, fast Type-C USB charging, MTL coils, 3mL pods, and incredible airflow for pure flavor.

Update: This Item Is Out Of Stock Everywhere – Check  Similar Pod Starter Kit Deals Below

When you first see the Onevape Airmod SE, you’ll be amazed at how fashionable the device looks and the finish options that include black, red, blue, green, and gold.  Moreover, this incredible pod kit has a thickness that comes in at just 13mm and the entire setup weighs only 32 grams for on-the-go-vaping.

Fitted with a 700mah battery that permits 25 watts of power, you may set wattage via the OLED screen and the adjustment button beneath beginning at its lowest one watt configuration.  A USB-C charging port at the bottom of the Airmod SE can top off the battery in less than an hour.  Best of all, the newly designed user interface features all the standard vape data and  the menu is effortless to see and navigate. For safety, there is intelligent atomizer recognition, as well as 8 seconds cutoff, short circuit protection, and low battery warning.

Unlike similar kits, the pods of the Onevape Airmod SE are not replaceable, so you’ll have to purchase new ones when the coils burn out.  With purchase, you will get two cartridges that feature an integrated DC 0.8ohm coil for a mouth-to-lung style of vaping that is sure to satisfy the taste buds with your favorite nic salt liquids.  Onevape has claimed that these MTL coils were put thru extensive lab testing to produce the original flavor of the e-liquid and to provide an incredible throat hit.  As a bonus, you may also use Smok NFIX coils with the setup.

An additional benefit of the Airmod SE pods is that they hold 3mL of e-juice for extensive vape times unless you receive the EU version with a 2mL capacity due to regulations.   Each cartridge is constructed from translucent PCTG, so you may observe the e-liquid level and know when it is time to top off the reservoir.  Unfortunately, we have been unable to find the refill method, but we imagine there’s a bottom fill port that is hidden behind a rubber plug.  Finally, two symmetrically placed air slots on the top permit air to enter the pod and strike the coil directly, further enhancing the rendering of flavor.